Following a long break from film directing, Zenofer Fathima has taken the off-screen route anew with the domestic thriller ‘A Dark Tale’. This chilling short film, which officially premiered  at Marriott Hotel in Al Jaddaf, Dubai, aims to raise awareness of the realities of domestic partner violence being a leading contributor to illness, disability and premature death for women. 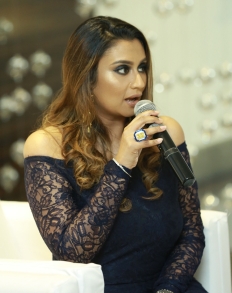 “It’s an ugly truth that is not being taken seriously until now. Some still have the mindset that family violence is a mere relationship problem that should be kept private. When in fact it’s a twisted reality, where women especially are made to believe that love and pain go hand in hand. It is rarely discussed in polite company but is prevalent everywhere. Domestic violence and abuse across all age, race and economic boundaries is a concern and ‘A Dark Tale’ aims to expose and examine this crucial issue,” Zenofer said.

‘A Dark Tale’ depicts a day in the life of a young couple who seem to have the perfect marriage. An ordinary, innocuous conversation at home between the two quickly gets contentious as it turned out the husband has some serious control and rage issues. The next scenes proved to be tragic, excellently capturing the horror of domestic partner violence.

“This film is a realization of my dream to enrich public discussion about domestic violence. Domestic violence is not something to be easily dismissed because if we allow it to happen even once, the abuse can progress to higher levels of intensity. A nurturing husband and wife relationship should always be the ultimate goal because it is the foundation that will make the family as the bedrock of society. I’m happy that I can use my passion for filmmaking to contribute to our awareness of serious issues like this and create empathy for the victims, while holding perpetrators of abuse accountable for their behaviour,” Zenofer further commented.

Zenofer uses her own film production outfit, ZEN Productions, to create short movies with timely messages meant to push social good forward. Her directorial debut, The Peril, which received praises from all quarters, sent an important wake-up call to parents about cyberbullying. It portrayed how the internet puts children at risk of online harassment and other forms of violence and harm. More often, Zenofer takes on the dual role of actor-producer to ensure that the creativity and overall vision of her film projects are realized.