TML, The Media Lounge Restaurant & Café is located in Media City Concord Tower.
TML The Media Lounge was founded in 2013, Inspired by the world of Media, TML strives to bring a new dimension to the world of Cafés by creating a hub for all Media Companies, Media Gurus and Media plugged individuals where all sources of Media come into life under one roof. The Media lounge is not the typical next door Restaurant & Café, it is not a day to day traditional experience, it brings in the various sources of Media, being Social Media, Paper Media, News tickers with live RSS feeds from all over the world and more, all at the comfort of your finger-tips, where you can seamlessly enjoy live updates about the highlights around the globe, and a chance to network with industry professionals while galvanizing your senses by the upbeat atmosphere, innovative food, beverages and Shisha flavors. 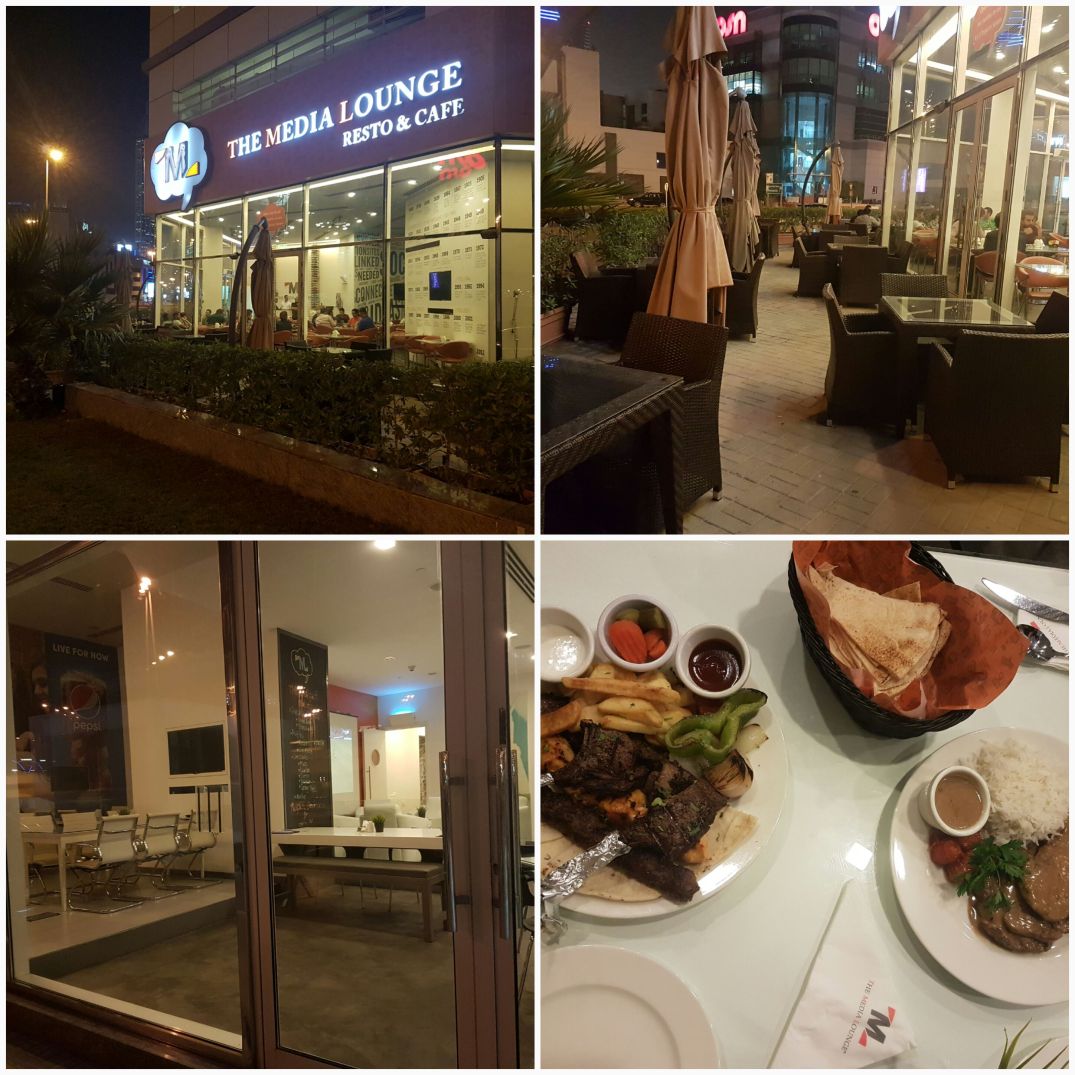 We had the chance to experience the much delightful meals here courtesy Zomato.
We went for dinner, the restaurant interior is seen through its big glass windows. The restaurant was occupied by a huge crowd of foodies/ and game & shisha lovers in its smoking area. They have various partitions /small dining halls, deli & non-smoking areas where families can also dine in at their comforts. The outside seating arrangement is also all set to entertain in the upcoming pleasant weather of UAE.

The menu has a good variety to offer. Suggested to us by our pleasant attendant Jeraldine to order a mixed grill platter was a very good decision. Being so fond of grills and BBQ, it was enough to savour from this platter .The much delightful & impressive platter is good enough for two ,char grilled lamb cubes, kofta,lamb chops, shish tawook, alongside grilled onions & tomatoes served on bed of khubus with French fries & garlic dip.

The other sumptuous dish which we had was the soft delectable Beef Steaks heavily coated with the pepper sauce prepared with thyme, rosemary & olive oil. It was accompanied with steamed rice.

Some other items to be selected from the menu are:
Caesar Salad, Caprese Greek Salad, Arugula Salad, TML Pasta Salad.
Egg Club , Tuna Pollo Sandwich, Philly Cheese Steak,
Grilled Chicken, Chicken Wings, Hummus , Moutabel, Baba Ghanoush Kibbeh Nayyeh Labneh with Garlic & Mint.
Desserts also have an amazing selection for your sweet tooth.
The restaurant was held the winner of Elite Cuisine Awards in 2013.The resto has also been approached by and advertised in major TV channels such as Abu Dhabi Media & CNN along with major Radio stations such as Radio 2 in Dubai. It is also been sponsored by Global brands such as Pepsi, BAT and Bloomberg as the main sponsors for the lounge.

One thought on “TML – THE MEDIA LOUNGE MEDIA CITY DUBAI”