Michelin-starred chef Heinz Beck has developed a well–deserved and industry-wide reputation as a master of gastronomy. Donning his chef’s cap as a teenager, Beck acquired his first professional kitchen qualification in 1983 and has since gone on to acquire an impressive resume of accolades and accomplishments in the culinary world, in the process establishing himself amongst both his peers and discerning diners as an innovative and uncompromising purveyor of the very best epicurean experiences.

Beck gained his early taste of life as a chef in the kitchens of Hotel Holzapfel and Bad Fuessing in Germany. In 1986, he took up a role at one of Munich’s prestigious Michelin starred catering companies, Feinkost Kaefer, before becoming Chef de Partie at the Colombi Hotel in Freiburg, holder of one Michelin star. This was followed by a position at the three Michelin star Tantris in Munich and an appointment as Sous Chef at the two Michelin-starred Tristan in Mallorca, Spain – his first step outside of his home country and one that would start a trend for bringing his culinary expertise to locations across the globe.

In 1991 Beck joined The Residenz in Aschau, Germany, as Sous Chef under the expert mentorship and guidance of Heinz Winkler – a leader gastronomy and one who is recognised as the youngest ever chef to receive three Michelin stars. Beck’s tenure at the highly regarded Bavarian establishment saw him attain his ‘kuchenmeister’ culinary certification and add further expertise to his already impressive haute cuisine portfolio. A subsequent move to La Pergola in Rome, Italy allowed him to fully realise his talent and acquired skills and resulted in the restaurant being given three Michelin stars. The restaurant is the only restaurant in Rome to have received this award, a glowing testament to his growing capabilities and status.

In 2009 Beck opened his first of what was to be many restaurants, with his inaugural signature dining concept located in London, UK. ‘Apsleys – a Heinz Beck Restaurant’ is a premier eatery at The Lanesborough, a St Regis Hotel, with the facility receiving its first Michelin star within just five months of its launch. He then proceeded to make his mark further afield by expanding to the Middle East with the launch of ‘Social by Heinz Beck’ at the Waldorf Astoria in Dubai in 2014. This was followed by a second restaurant in the city titled ‘Taste Of Italy by Heinz Beck,’ which has established its name in Dubai as a first choice in premium casual dining.

Throughout the course of his career, Beck has garnered and extensive array of awards and accolades that have cemented his reputation as the very best exponent of the culinary arts. In 2000 he was bestowed the Golden Medal of the Artist’s Foyer International Prize from the Rome University La Sapienza – the first time in 30 years that the prize has been conferred to a chef. In 2003 he was given the Cuocoric 2002 as Best Kitchen Chef and was named Chef of the Year by the International Congress of Gastronomy. The year also saw him awarded the Lion of Venice Career Award from the AEPE for ‘making Italian gastronomy the art of Italy’s living, great, with particular attention to health and innovation.’ In 2004, Enoteca Italiana bestowed him with the Ampolla d’Oro award and the Consorzio Tutela del Radicchio di Treviso honoured him the Radicchio d’Oro award. The International Festival of Food and Wine 2006, which took place in Wolfsburg, Germany, added to Beck’s long list of awards and accomplishments, with the event seeing him the recipient of the prestigious Ritz Carlton Life Time Achievement Award.

With a wealth of international experience at the highest level of gastronomy since his earliest days in the kitchen, Beck decided to complement his deft use of the chopping knife with that of a pen. He subsequently put his culinary exploits into print with an array of well-received and popular publications. While a number of his books deal with his famous recipes, others delve into his philosophy of cooking and his focus on the unique interpretation of the modern kitchen. His works to date include: Beck (2001), Pasta (2003), Arte e Scienza del Servizio (The Art and Science of Service, 2004), Finger Food (2004), Vegetariano (Vegetarian, 2005), L’Ingrediente Segreto (The Secret Ingredient, 2009), Ipertensione e Alimentazione (Hypertension and Nutrition, 2010) and Consigli e ricette per piccoli Gourmet (Tips and recipes for young Gourmet, 2012).

Heinz Beck has collaborated with and has his name associated with the following restaurants throughout the course of his career: 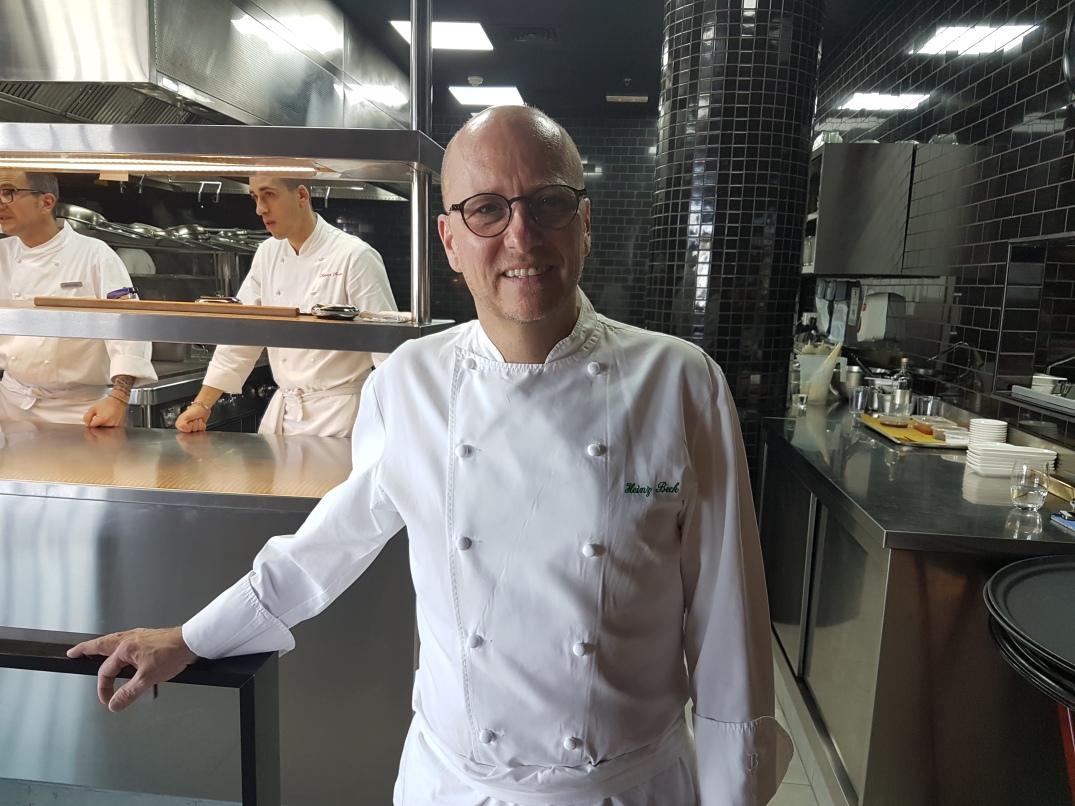